Those who know me personally know Halfeti by Penhaligon’s is a perfume I can’t live without. You can read about that HERE

You can imagine how excited I was when a new perfume under the Penhaligon’s wing launched called: Halfeti Leather. Halfeti is a Penhaligons bestseller that was launched in 2015 containing an impressive lineup of ingredients such as Violet, Saffron, Rose, Jasmin. In the base you’ll find Leather, Oud, Amber, Tonka, Vanilla, and Sandalwood. Like a beautiful, soft, cashmere scarf you wear all day. Or that feeling of a warm whiff of fresh air after a long flight, as the airplane doors open after you arrived at your tropical destination. Catch my drift? 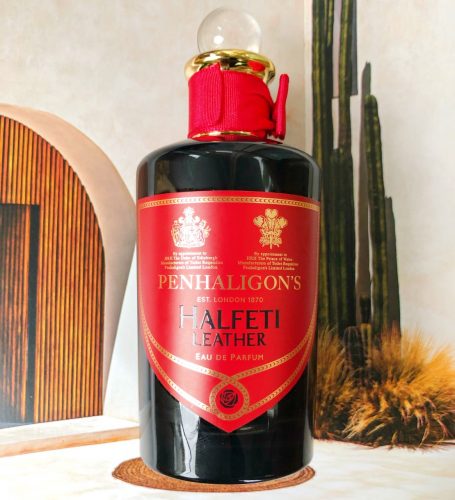 Halfeti leather that is launched in 2019, is just as intoxicating and impressive with Citrus and Bergamot notes in the top, Lavender, Cardamom and Cinnamon in the middle, and Oud, Patchouli and Leather in the base.

While Halfeti has a more powerful and dry Rose, Penhaligon’s new Halfeti leather is less rosy and more fruity. Think dark fruits such as Plum, Prunes, and Cherries. Add the intensity of leather and you get a fruity leather scent that has a slight comparison to Halfeti but the dry down is completely different which I love. Happiness in a bottle. That said; you should really try it for yourself. (100 ml | £178)