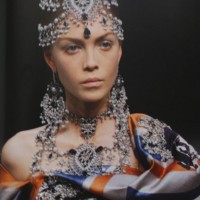 Packed with breathtaking photographs, this book is a tribute to Alexander Mc Queen (1969 – 2010) elebrates the incredible creation of an iconic , imaginative, and inspirational fashion designer whose work turned heads and hearts all over the world.

Alexander worked as the head designer at Givenchy for five years before founding the Alexander Mc Queen and McQ labels. Mc Queen’s dramatic designs, worn by celebrities including Björk, Lady Gaga and Rihanna, met with critical acclaim and earned him the British Designer of the Year award four times.

This book is a must have for fashion lovers everywhere, showcasing the dramatic and spectacular work of a fantastic designer.

This book is available thru: www.abc.com