US ingredients company Beneo has introduced a candy to the European market which it claims incorporates body fragrance, working from the inside out, which according to a Data monitor analyst, is one of the most innovative products to hit the shelves.
.
Beneo and Alpi, a confectionery company from Bulgaria, have produced the Deo Perfume Candy and claim that when the sweets are consumed, the skin emits rose oil components contained in the confectionery product in the form of an ingredient called geraniol.

Beneo says the concept was developed as part of its R&D efforts to assist candy manufacturers in using healthy, alternative and innovative food ingredients to break new ground in confectionery markets worldwide.

Fragrance released through the skin

According to Beneo, once the candy has been consumed a rose fragrance is then released through the skin.
It is claimed to be caused by the ingredient geraniol, which is a colorless liquid found in plants such as rose, lavender and vanilla.

Once the natural antioxidant, geraniol is consumed in candy form, it is said to leave the body through the pores, creating a naturally sweet smell that is claimed to last for hours. Beneo explains that the effect is very similar to the familiar way a pungent ingredient such as garlic transmits odor through the skin.

In the case of garlic, strong-smelling sulfur compounds form Allyl Methyl Sulfide, which cannot be digested and is instead excreted through the pores. The Deo candy is also made with Beneo’s natural sugar replacer Isomalt, meaning that it does not contribute to elevated blood sugar levels.

The company claims there is a prolonged taste of the rose flavor in the mouth, in addition to the even longer-lasting fragrance effect on the body. 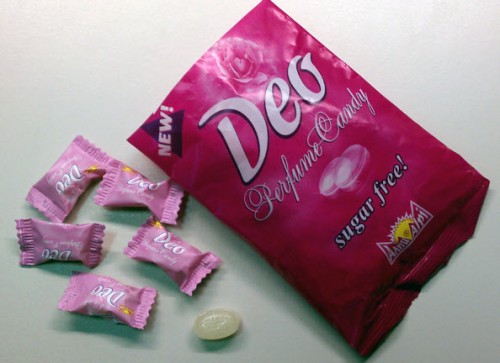