Last week I was invited to celebrate the 160th birthday of Kiehl’s with the opening of the first shop in shop in the Bijenkorf in Amsterdam. The Kiehl’s Charity Art Bag was unveiled  as the upbringing of the bags will directly go to Foundation support Emma Children Hospital AMC.

Beauty stylist Tom Sebastian, hosted the evening and at 18.15 hours, the speakers and the audience gathered in the store for the countdown and symbolically handed the Kiehl’s team the “Kiehl’s heart loves the Bijenkorf’ to Tessel Elverding, the Cosmetics Buyer at the Bijenkorf.

Kiehl’s Charity Art bag for Foundation support EmmaAfter the opening, the event continued on the fifth floor where the bar was transformed into a New York Kiehl’s Venue. A living Statue of Liberty was ready to take pictures with guests, and the window gave a view of the skyline of New York, the birthplace of Kiehl’s. Robert ten Brink, Ambassador of the Emma Foundation came to the Bijenkorf especially to reveal the bag. The Kiehl’s Charity Art Bag is the drawing “Animal Dance” made by the Amsterdam artist Fabrice,

You’ll be able to buy the Kiehl’s Charity Art Bag until January 2012 for € 10.00
100% of the net proceeds will be donated to the Foundation support Emma Children’s Hospital AMC. 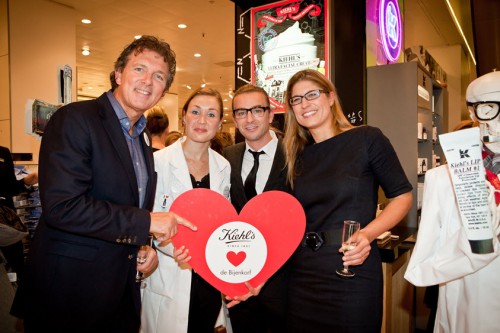