If we are lucky enough to get older, the facts are that our bodies will show signs of aging. Ongoing studies and research show that scientists have primarily linked the aging process to one biological factor: Zombie Cells.

What are they? There is a process called mitosis, which is a fundamental process for life, where a cell duplicates all of it’s contents and splits to form two identical cells. Zombie cells, a.k.a senescent cells, are cells that stop dividing. Zombie cells become more common as people age.

Your immune system gets rid of these cells when you’re young, but it can’t clear them as effectively when you get older. When these “zombie cells” are present, skin ages faster, losing its thickness, gaining wrinkles, and becoming less dense and elastic. Nescens Swiss anti-aging skincare has created an advanced formula containing a high concentration of senolytic agents that can target senescent cells and restore tissue. 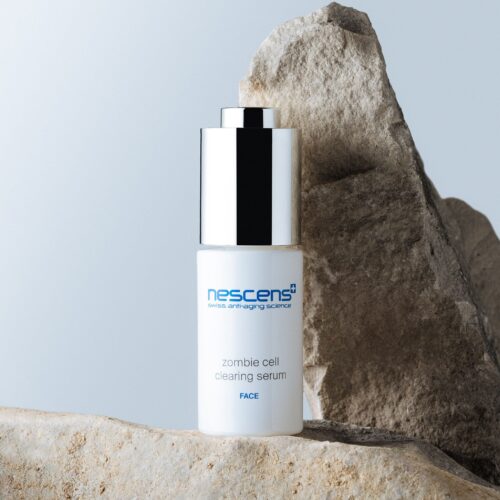 What can a skin serum do?

Nescens has created the first serum designed to clear pro-aging zombie cells. It’s quite an advanced formula containing a high concentration of senolytic agents that can target senescent cells and restore tissue.

The zombie cells clearing serum promises to increase the density of the skin. It also helps to increase elasticity and, collagen production from the inside out leaving skin feeling soft and smooth for a very long time. That said; this is the “first” serum that removes zombie cell accelerators from the aging process. A profound breakthrough by physician-professor Jacques Proust, an expert in the biology of aging science and anti-aging. (30 ML | € 395)