Beginning with the Australian Open, the first shades to be released under the collaboration will include Simply Smashing, a glowing green Nail Lacquer, paired with a revolutionary new product, Black Shatter top coat.

Once applied to the dried Nail Lacquer, the top coat begins to disappear, leaving behind a leopard print-style pattern on each nail.

Simply Smashing has a similar finish and application as the summer release Catch Me In Your Net. It’s a bit on the sheer side soyou’ll need two coats for it to appear completely opaque.

Black Shatter is a top coat that needs to be applied over completely dry nail polish. It applies like a typical black creme but dries in a “shatter” pattern once dry. A thin coat will shatter more resulting in smaller shards of polish on the nail while a thick coat will make it more chunky. The two colors are only availablw in a set! 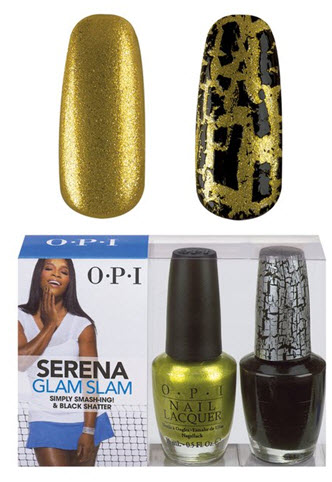 Available at the end of January!

Serena’s becoming quite the manicurist. She recently gave Oprah a pedicure. Check out the video !